Stopped behind a school bus and riding with participants one late afternoon last fall, ProAct direct support professional Amanda Anderson peered out of the bus window and saw a couple of wheels turned upright, deep in a Red Wing ravine. She called 911. 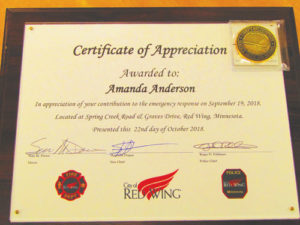 “The rest of the vehicle was pretty much down in the bushes, stuffed down in there,” she said. Inside was a mother, who had died, and her three young children, who were alive. They had been missing since the mom left for work at 4 a.m. Anderson said if the bus hadn’t stopped at that spot, the crashed car likely wouldn’t have been discovered. She had gone past the location on a morning route and no one saw it.

Anderson was recognized by the city of Red Wing with a plaque, and a pin from the chief of police.

This story first appeared in the “People Achieving” newsletter. To receive it by mail, please email Melinda Lien.