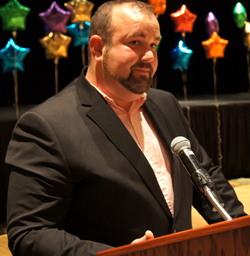 Airtex Design Group is a worldwide production company based in Minneapolis that Kyle Adams shared details about ProAct’s Employers of the Yearutilizes ProAct for material die cutting, assembly and packaging. Products are bulk-shipped to the company’s customers, explains Subcontract Manager Jurij Sarafanov, with Airtex. The company has been in business for 103 years and was formerly known as Miller Bag Company. It has worked with ProAct for a number of years and the vast majority of ProAct’s consumers are a good fit for the work, explains ProAct job developer and sales representative Kyle Adams (at right).

Workers handle swatch cards, representations of drapes that come in various sizes which are die cut. Headers and product stickers are attached, these are bagged and then shipped, said Sarafanov. “I have nothing but good things to say about ProAct,” he said. “It’s a good company to work with, and we appreciate their professionalism and work that they do for us.”

The second winner, Paul’s Industrial Garage, or P.I.G., employs seven individuals from ProAct at its materials recycling center in Diamond Bluff, Wis., just across the Mississippi River from Red Wing, Minn. The company hired a daily crew and supervisor in the spring of 2013 to help sort recyclable glass, plastic and aluminum collected from area homes.

The work can be dirty, but the ProAct crew and supervisor are drawing compliments for the opposite. “I have people stop by our building and they’re amazed at how clean it is,” said General Manager Dave Deml. Since ProAct began here, recyclable material processing has increased by 25 percent. Deml gave the crew more responsibility and said they’ve handled it well.

“They’re doing very well over there and P.I.G. likes us,” explains Adams with ProAct. The crew has stayed nearly the same since it began. Reliability was key with Deml, and ProAct Site Supervisor Pete Quist has led the crew to do more than Deml originally thought possible, adding tasks such as material baling.

The top employers were honored at ProAct’s annual recognition banquet held at Treasure Island Resort and Casino. In addition to business recognition, the event celebrates the accomplishments and longevity of individuals with disabilities in ProAct’s Red Wing, Zumbrota, and Hudson, Wis.-based programs.

ProAct has a major operation in Red Wing. Its headquarters is in Eagan, and there are additional locations in Zumbrota and in Hudson, Wis. Its mission is to serve individuals experiencing barriers to employment and self-sufficiency due to intellectual and developmental disabilities, physical disabilities, mental health issues, traumatic brain injuries, and other challenges.