A swivel camera tracks Tony Judd as he moves around a room at his Prior Lake home engaging virtually among others with disabilities from ProAct. 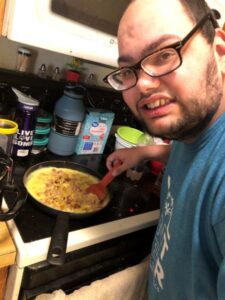 “The best thing ProAct could have ever done for Tony and others is create Virtual Enrichment classes,” said Carol Murray, Judd’s guardian and caregiver, who lives in a separate level of the same house.

On starting out, he was shy and she would answer questions for him. When some others wouldn’t listen, he’d shut down and stop talking, Murray said.

But over time, his confidence increased. Judd now joins the sessions independently, initiates conversations and is forming new friendships outside of his ProAct day. His anxiety has decreased, and there are many activities to do with about 20 hours of virtual programming each week.

Cooking class is a favorite. Judd has made soap and lotion, learned about amazing animals, started days with coffee and the “breakfast club,” tackled a scavenger hunt and created artwork.

“I hear rave reviews about you Tony, how your instructors love when you’re in their classes,” said Shakopee Program Manager Ali Brown. “I’m so happy for you and virtual.”

As each new class schedule was released, Judd signed up for more classes. “It’s a perfect fit for him and our family,” Murray said.

Phone conversations between Judd and his friends just didn’t happen in the past, said Murray, but they are now. One from Special Olympics talks to him every day.

Before COVID, Judd ran the 25-, 100- and 400-meter events and he’s looking forward to getting back into these sports, Murray said. He also enjoys summer fishing at a cabin.