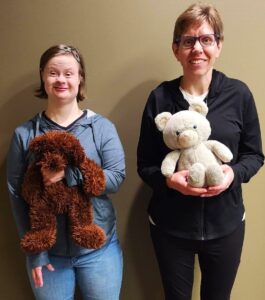 Some people may still have a special teddy bear or remember one from their youth. Teddy bears can be a special companion to many, providing comfort and joy so, on National Teddy Bear Day, the people of ProAct in Shakopee welcomed many of these stuffed companions to their day. Participants were proud to show off their teddy bears and keep them by their side, sharing their names and how they came to be, said Senior Program Manager Ali Brown. 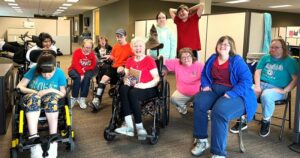 Those who are familiar with the Harry Potter book or movie series know it can be time consuming, but ProAct has been the spot to be for this book club once a week, said Brown. Direct service professional (DSP) Liza Svihel shares her love of the series with several participants. She gathered them around the group’s library, the former Camp ProAct area, and began reading the first book. She started with eight participants, and it quickly grew to more than 15. This may take some time because those books could be used as booster seats, but they are all game and ready to cast spells on everyone around them, said Brown. 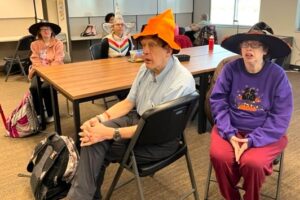 With Halloween approaching and the second “Hocus Pocus” movie being released and streamed on Disney+, people in Shakopee just had to view it, said Brown. For those who wanted to watch, popcorn was served and ProAct streamed it in two areas. “I could hear the laughter from all areas of the building,” said Brown. “Some of us even dressed as witches, some themselves a scary witch and others the ‘good’ witch!” 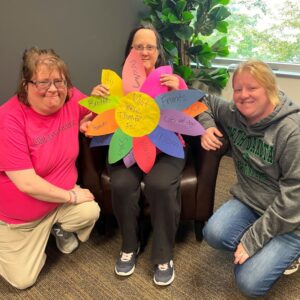 Gratitude Day was a good reminder to Shakopee participants and staff to be thankful. “We took the time to write down what we were grateful for, shared with others around us and some even made a gratitude flower,” said Brown. At times we can forget what we all have in our lives to be thankful for, so this day was welcomed by many. Some said we should carry this on year-round.

What better way to celebrate the United Kingdom’s “National Fitness Day” than to have a “Loop Walk” competition, Brown explained. “If you know our participants, they love to engage in a contest, even when it comes to exercise,” she said. “It was fun to watch how they competed, yet cheered each other on.” In the end, a group from Large Area 2 won, averaging 9.8 loops each.

‘Painting with Lotta’ adapts to engage even more people 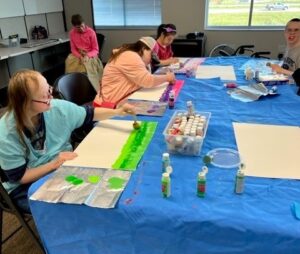 “Painting with Lotta” has become a popular “extra” class activity, and many ask when they can meet with her next, said Brown. DSP Lotta Facente has invited those who love painting to follow her guidance and expectations. She has also invited painting lovers who have some difficulty following along, and some, to her surprise, have created masterpieces. “When it is more difficult to lead the class, Lotta has been creative to bring the class to them, adding in extra staff hands to make this experience positive,” said Brown. The manager said seeing those smiles and pride in their paintings has been the best part. 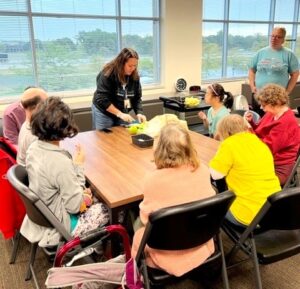 When Shakopee cooking classes purchased an Insta Pot, people knew it would be put to good use, said Brown. This past month, DSP Liza Svihel helped a few groups make applesauce. Participants helped each step of the way, but tasting might have been the best part.

Cooking classes were back in force. Participants meet the week prior to discuss what they will make and ingredients needed for the following week. “We were able to enjoy some quesadillas and upside-down pineapple cake, yum,” said Brown. People appreciated using the air fryer, blender and mixer, but taste testing was probably the favorite.

Between August and September ProAct had a plead for a gluten-free cooking class. DSP Rebel Rozeboom met with those who expressed interest. They learned about gluten, how it affects the body and then discussed a treat to make.

Thanks for dedication, benefits, smile updates