Mardi Gras (the French term for Fat Tuesday) happens the last day of Carnival and the day before Lent begins (Ash Wednesday for Catholics). In 2022, Fat Tuesday happens on March 1.

The Carnival celebration, which includes parties and parades, begins on or after the Christian feasts of the Epiphany (January 6) and ends the day before Ash Wednesday (Fat Tuesday or Mardi Gras). It is the celebration period before the beginning of the fasting season of Lent. In some cultures, Fat Tuesday is also known as “Shrove Tuesday” or “Pancake Tuesday.” 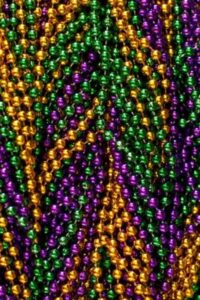 The King Cake, a traditional dessert, has biblical roots commemorating the 12th day of Christmas when the three kings came to visit baby Jesus. Most cakes are baked with a tiny baby figurine on the inside, and whomever finds the toy, as tradition holds, must host the next big party.

Since its first impromptu celebrations in the early 1700’s, Mardi Gras was regularly cancelled or banned for its destructive drunken parties—that is, until 1837, when a secret society known as the Mistik Krewe of Comus aimed to elevate the chaotic experience, replacing the debauchery with lavish balls and parades. Eventually, the “Fat Tuesday” celebrations of New Orleans garnered much support and enthusiasm, later establishing itself as the Mardi Gras capital of the country.

The masquerade or wearing of masks is an enduring tradition of the Mardi Gras festivities as an opportunity for people to shed their inhibitions and fully imbibe in the party-spirit. A New Orleans city ordinance prohibits the wearing of masks on any other day, and on Mardi Gras masks must be removed by 6 p.m.

Parades occur on Mardi Gras (Fat Tuesday) with floats notoriously give out “throws,” which are exactly what they sound like: objects thrown into the crowd. They range from coconuts (given by the Krewe of Zulu) to stuffed animals or gold doubloons (by the Krewe of Rex). Beads are the most ubiquitous throws, which are given by almost everyone. A known code of asking for throws is to shout the phrase “throw me something mister.” It’s considered a great honor to receive a throw.

Finding jobs, living on his own, with a little helpRivertown Olympiad and celebration of ‘twos’