The happiness of a steady smile and positive attitude coupled with on-the-job enjoyment, increased confidence and independence are the ideal and real outcomes found with Connor R. at Casey’s General Store in Cannon Falls.

“Connor enjoys the balance of working and having fun while he works,” said employment specialist Brianna Otto. His mother, Melissa, drops him off at work and picks him up. When she asks him how his day went, his answer is always the same, “Awesome.” 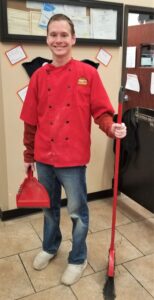 Otto helped with Connor’s job search and provides the support he needs to work about 20 hours per week. Hired to help in the kitchen, Connor preps food, including pizzas and sub sandwiches as well as sweets.

“Every day I go to work and do everything I can to make my managers proud. I enjoy helping them to be happy and that motivates me,” he said. “At the end of the day, even if it was a stressful day, I know I gave it my all and did everything that I could to make them proud of me.”

Otto came alongside Connor with support during orientation, and he caught on to the tasks and became comfortable with his coworkers quickly, she said. With some volunteering cleaning experience, he was fresh out of high school and in his first job.

She helped him clarify his work interests while his mother helped him create a solid resume that proved very helpful in his search, Otto explains.

Job match confirmed by many

On-the-job supports faded to twice a month once Connor was comfortable, said Otto. Each time she visited, he emerged with a huge smile on his face and let her know that he loves his job.

Managers and coworkers are confirming his success, as well, with great reports. “Connor has also been able to build relationships and friendships with his coworkers,” she said. One of his favorite things about work is that he can do his job while still being able to socialize and have fun with them.”

The job has impacted other parts of his life, as well. Connor has made new friends, learned new skills, and made better pizzas. “It has impacted his life in a positive matter,” said Melissa. Her son has built greater confidence and become more independent.

Many work together, making it work

When stress levels rise, Connor stays calm by knowing that he is doing the best he can do, Otto said. If he gets overwhelmed, his coworkers notice, and he takes a short break. “Connor has a positive attitude and is always flexible, which helps make the store successful.”

Both Melissa and Connor have said that working with ProAct has been a positive experience, Otto explains. They appreciated the great communication between ProAct and Minnesota Vocational Rehabilitation Services (VRS).

Connor recently celebrated three months on the job. “When I am at Casey’s, it feels like I am back in high school again which Is something that I missed,” he said. “I enjoy that sense of friendship and I feel like I have that at Casey’s.”