Drawing from a decade of training and experiences with ProAct in Red Wing, Adam Dolezal is exploring the next chapters of his life with greater confidence, finding job opportunities and impressing employers, while becoming more independent.

The changes are happening with help from ProAct Employment Supports and Individualized Home Supports, explains Senior Program Manager Pam Veith. Dolezal’s goal was to move to his own apartment and work independently in the community, she said.

He started out in Red Wing’s center-based program and worked in the extensive electronics recycling effort there. This led to a temporary job with the city of Red Wing early in 2021. This step was a key catalyst to help him feel ready for other jobs outside of ProAct. 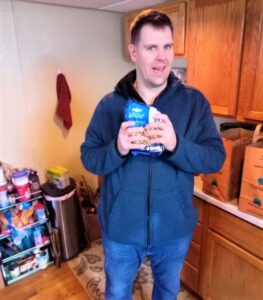 Dolezal worked with a ProAct employment specialist and was hired by the Duluth Trading Company store in the city. Proving he was versatile, he assisted customers on the sales floor, stocked items and cashiered.

Solid support in pursuit of goals

“I’m proud of the goals I have accomplished so far in my life,” said Dolezal. Case Manager Steve Whitmore gave employment and in-home supports and the two have developed a good relationship, said Veith.

Together with his family, Dolezal decided to move from Red Wing back to his hometown in Cannon Falls and found a job there. The Family Fare grocery brought him on staff to cashier.

“Adam earned the nickname ‘The Rock,’ as he has been very reliable to them, particularly on days they are short-staffed,” said Veith. ProAct provided employment support there as needed.

Separate apartment from family, for starters

On the home front, Dolezal moved to an apartment attached to his parents’ house, a temporary arrangement until he can find a separate place to rent. The new in-home help also came through Whitmore, who meets with Dolezal each week. The two work on meal planning, shopping, cooking, budgeting and more, Veith said.

“Among Adam’s goals for himself are to eat healthier and get more exercise,” she said. “So, part of this shopping and cooking includes learning how to purchase and cook small healthy meals for himself.” ProAct staff are helping with more exercise options.

To get moving even faster, and drive himself to work one day, Dolezal has also been working on behind the wheel training and hopes to obtain his driver’s license in the next few months, Veith explained.

The man’s parents, Veith said, are very proud of him. His mother even had compliments for her son’s cooking and clean kitchen. His grocery store work has also left an impression. “They love him at his job, and everyone says how friendly he is at work,” his mother said.

The family is planning a move to Texas where their son has already scouted out some new job prospects. He also works on photography in his spare time.