After 13 years of local and statewide competitions, one western Wisconsin Special Olympics athlete finally realized her dream of competing at the national level and proudly came away with a pair of gold medals in track and field events. 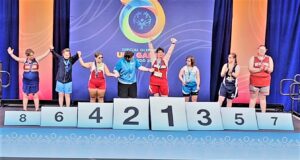 Briana Larson, a resident of Plum City and ProAct participant in Red Wing, was one of 65 athletes and unified partners from her state chosen to compete in the 2022 Special Olympics USA Games in Orlando, Fla. Prior to their selection, athletes were required to participate in a training camp to qualify. In addition to athletic ability, competitors also met requirements in social interaction and team-building skills.

Besides training very hard, exercising, keeping track of water intake, daily steps, and hours of sleep, each athlete was also required to do fundraising to help with the costs to send athletes to the national games. Thanks to the generosity of companies, businesses, law enforcement, family and friends, Larson met and surpassed her goal in fundraising. 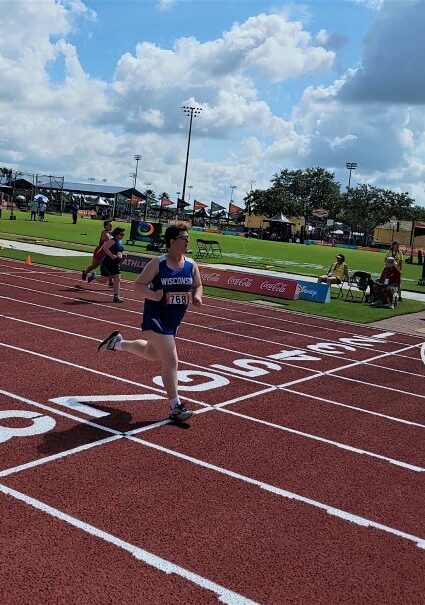 Finally, after years of hard work, fundraising, and going through the selection competition process for the third time, Larson was chosen to represent Wisconsin in the 2022 Special Olympics USA Games. She found out the good news late last summer during a pizza party that her parents, Bob and JoAnn Larson, held during her Special Olympics bowling team’s practice.

When asked how it felt to be selected to represent her home state, she said, “I was so darned excited that I yelled and screamed a lot, and I cried a little too! I was so happy to have a chance to compete to win a gold medal.”

Larson proudly represented Wisconsin at the USA Games not only as a member of the track and field team, but also by leading the Wisconsin delegation onto the field during the opening ceremonies. This was a reward she earned by being the top fundraiser for the second half of the fundraising time frame, and the highest fundraiser overall, with a tally of over $14,000 to her credit.

At the national competition, Larson participated in a variety of track and field events. In the 100-meter run, she finished first, earning her first gold medal. As the second member of the 4×100 relay, she was instrumental in helping her team bring home another first place and a team gold medal. Larson also received a 7th place pin for her mini javelin throw. 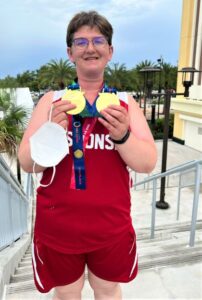 Facing the intense heat and humidity of Florida in June, the weather wasn’t the only thing that seemed to be on fire during the national games. Facing opponents from 51 delegations across the United States and 11 Caribbean nations, Team Wisconsin brought home an impressive 14 gold, 12 silver and 13 bronze medals. Track and field events led the way with five gold, two silver and four bronze medals.

Looking back on how it felt to finally realize her dream of competing in the USA Games, Larson said, “It was pretty darn good and exciting, and I got to be on TV a lot.  I loved it and I’m going to try out again in four years. It’s a big deal!”

On regular days, she works at Koozie Group in Red Wing with support from ProAct. The employer donated $1,500 to her fundraising effort, the Red Wing Republican Eagle reported.

FurChilds fits his interests, Pre-ETS helped him get there