Activities were more than plentiful across ProAct’s four sites in February and late January.

Walking through the flowers from the Winter Carnival at the Como Park Conservatory, participants experienced the rain forest and the park’s famous sloth and anaconda, explains Program Manager Stephanie Osman. Class groups ventured to the Midtown Global Market to take in some art and food from other cultures, and a Mall of America visit was in the works, as well as a trek to the Science Museum of Minnesota. Individuals learned about the Hubble Telescope through an Omnimax Theater film. Earlier, groups toured the State Capitol, rode on the carousel at Maplewood Mall and were “walkin’ away the pounds.”

In Shakopee the Super Bowl captivated many individuals who made predictions and crafted helmets to place on their “side,” said Program Manager Ali

Brown. “You can almost feel their excitement when they make a basket or catch a football,” she said. A number of participants here are involved in the Special Olympics and take sports competitions seriously. Sam B. said he has fun watching the big game, eating pizza, chicken kickers and pop. 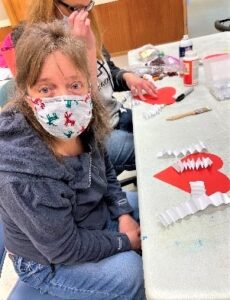 Red Wing participants discussed the game, commercials and half time show the day after the Super Bowl. They made crafts to display ahead of the game, explains instructor and DSP Lori Clemens.

Valentine’s Day fit well with the group’s kindness class as participants made 40 Valentines to share with people at four senior living facilities, two of them in Wisconsin. A party on the actual holiday included bingo and prizes, as well as Valentine’s cookies on the snack cart, Clemens explained. And to top it all off, individuals made Valentine crafts and cards for family and friends.

Valentine boxes were made by people in groups at the Shakopee site, said Brown. Individuals paraded around to showcase their creations, followed by cookies and dance. “Dances are a blast, and funds from our Valentine’s auction sales will help us purchase our very own speaker with lights and amped up microphones,” she said.

The 2022 Winter Olympics also captured attention in Shakopee, where participants tracked medals, watched highlights and some of the individual games. They flew the U.S. flag, sported tattoos and offered up cheers.

People from ProAct’s easterly site in Hudson, Wis. made a visit to Shakopee and people enjoyed interacting together, said Osman. Shopping was another theme, with weather keeping people closer to home base. Individuals perused items at Target and Goodwill, and had lunch at Culver’s. There was a Mall of America visit and they planned to tour the Minneapolis Institute of Art. Earlier, a Hudson group visited Cabela’s.