Some facts about seizures

1. You can’t swallow your tongue during a seizure. It’s physically impossible.

3. DON’T restrain someone having a seizure. Most seizures end in seconds or a few minutes and will end on their own.

4. The correct seizure first aid is simple: Stay. Safe. Side. STAY with the person and start timing the seizure. Keep the person SAFE. Turn the person onto their SIDE if they are not awake and aware. Do NOT put anything in their mouth. Do NOT restrain. Stay with them until they are awake and alert after the seizure. Call 911 if the seizure lasts longer than 5 minutes; repeated seizures; difficulty breathing; seizure occurs in water; person is injured is injured, pregnant or sick; person does not return to their usual state, first time seizure; or the person asks for medical help.

5. Epilepsy is NOT contagious. You simply can’t catch epilepsy from another person.

6. Anyone can develop epilepsy. Seizures start for the first time in people over age 65 almost as often as it does in children. Seizures in the elderly are often the after effect of other health problems like stroke and heart disease.

7. Most people with epilepsy CAN DO the same things that people without epilepsy can do. However, some people with frequent seizures may not be able to work, drive, or may hav 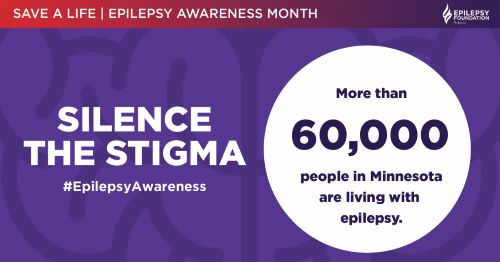 e problems in other parts of their life.

8. People with epilepsy CAN handle jobs with responsibility and stress. People with seizure disorders are found in all walks of life. They may work in business, government, the arts, and all sorts of professions. If stress bothers their seizures, they may need to learn ways to manage stress. But everyone needs to learn how to cope with stress! There may be some types of jobs that people with epilepsy can’t do because of possible safety problems. Otherwise, having epilepsy should not affect the type of job or responsibility that a person has.

9. Epilepsy is a chronic medical problem that for many people can be successfully treated. Unfortunately, treatment doesn’t work for everyone. AT LEAST 1 million people in the United States have uncontrolled epilepsy. There is still an urgent need for more research, better treatments, and a cure.

10. Epilepsy is NOT rare. There are more than twice as many people with epilepsy in the U.S. as the number of people with cerebral palsy (500,000), muscular.

Diversity, Equity and Inclusion – Diwali – November 2021What participants and staff are thankful for this season

May is Arthritis Awareness Month