Tony Breyer wears a step counter on his wrist as he stocks product at Party City, answers questions and finds items for customers.
“I’m the master of all costumes,” he says. That talent runs in his family.

A walkie-talkie is at hand to poll other store staffers for answers he doesn’t yet know. Breyer said it took about six months to learn the large store well. He’s been here more than a year. What began as a temporary position in Apple Valley turned permanent. 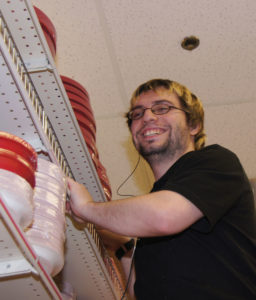 “They liked him so much that they created a position for him,” said Allie Chambers, the ProAct designated coordinator who follows up with Breyer to make sure all is well. When she visits, she said he knows where every item belongs and does his job very well.

When Breyer first started at ProAct, he said he wanted to work at a costume store and that has happened, she said. ProAct helped him with needed work experience and training to lay the groundwork for the job.

Breyer served on crews at the Rapala warehouse and for Dianne’s Custom Candles, he packaged balloons for Anagram and cleaned at a Farmington church. He’s also been a regular on the ProAct Playhouse cast.

Playhouse Co-director Matt Briggs said Breyer is very responsible and is a good leader. “He has really come out of his shell by doing theater and has become more confident and articulate,” Briggs said. Part of that is being the first person to step up and help, even when he’s not being asked to.
“I’m the type of guy who just goes with the flow,” Breyer said.

[This story first appeared in the ProAct Annual Report, which is sent by mail. To join our mailing list, please email Patty Carlson.]