Major snowstorms and icy roads impacted ProAct’s Red Wing location in February, but few could predict, or remember a dramatic scene like the drifts on the morning of February 25.

“The wind had just plastered the snow across the whole front of the building,” said Director Sally Ogren. The full cleanup took several days, and a lot of hard work by maintenance men Bob Furchner and Brock Ganser.

For ProAct’s buses and other transport vehicles, Ogren said it’s left up to the drivers to decide if it’s safe to go or not. A second staff member came along for a difficult drive to Wisconsin one day, and the two turned back because it wasn’t worth the risk. 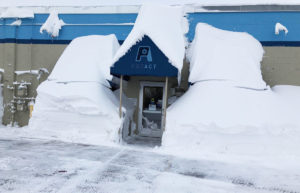 Transport in town was a somewhat different story, she explains. Hiawathaland Transit continued to operate, and the ProAct building was always open on weekdays. The hilliness of Red Wing and streets that are not well plowed sometimes make it impossible for ProAct drivers to reach participants’ homes.

Group homes sometimes need to bring people in if they can, Ogren explained.
The director said people were taking it in stride. “We were extremely fortunate that we haven’t had any major problems,” she said. It was unfortunate, however, to have so many missed days for participants in February, the director said. 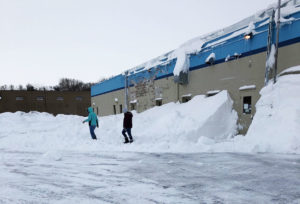 The snow only added work for an already busy maintenance staff, which also keeps up the Zumbrota location. Conditions there were bad enough to collapse the roof of the historic Zumbrota Covered Bridge, the last state’s last such bridge in Minnesota. Its roof was added in 1871. See the story in the Pioneer Press.