Staff and participants in Red Wing thought it would be a good idea to start some monthly community projects especially since the project before Christmas was so popular. In December, they assembled bags for people who are homeless.

For the April project, participants and staff decided to submit a project idea to Thrivent to help the United Way with its “Birthday in a Bag” project. People buy items for 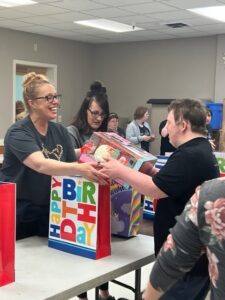 children whose parents can’t afford a birthday party. There was birthday cake, a birthday banner, candles and gifts.

Participants went to Walmart and the dollar store to buy the items. The group assembled the kits and delivered them to the United Way. “We were able to give 10 boys and 10 girls birthday bags,” said Case Manager Gloria Solsaa.

ProAct received $250 from Thrivent to purchase supplies along with $100 from snack cart sales at the site, a $100 donation from a family and some other donations from participants.

Solsaa said to stay tuned for their next project this summer.