Top honors for gold came in the 25- and 50-meter dashes as part of the track and field events held at Stillwater High School. His mother, Christy Danisch, said her son has been a competitor since he was nine or 10 years old. He also participates in alpine skiing, bocce ball, bowling, swimming and tennis. Drew attends ProAct in Eagan.

“Special Olympics not only helps him work on being an athlete, it allows him opportunities to socialize and make new friends,” said his mother. 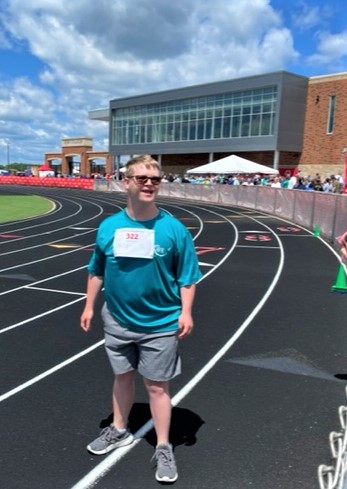 Her son earned additional bronze medals in the 25-meter freestyle swim and four-person swimming relay. Christy said he was proud to show off his medals and expressed that he had a lot of fun and plans on competing again in future events.

Drew cheerleads with the Northern Elite adaptive cheer team in the fall and attends ProAct in Eagan for day services. ProAct gives him a purpose and a place to go each day, said Christy.

“He enjoys attending classes, loves his teachers at ProAct and seeing his friends every day,” she said. “He is kind and friendly, just an inspiration to everyone he crosses paths with.”

Thanks to Case Coordinator Devin Klein for his assistance with this story.